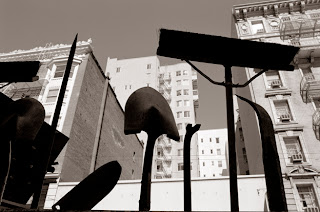 "Conditions for photojournalism have changed dramatically during the last decades. It has receded practically completely into the background as a source of primary information. Gone are the days of the great picture essays like the funeral of Winston Churchill in February 1965. Life magazine rented houses along the parade route especially for the purpose of covering the event from various angles, and an aircraft was chartered to transport the exposed films. One can already recognize the motion picture principle in these reportages, i.e. sequences of still pictures. It wasn't much later that the mass medium of moving pictures - global television - made such reportages superfluous. We now expect pictorial information at the time an event is actually occurring, in other words, live. Life magazine, along with nearly all current picture magazines, has disappeared from the market. War reportages as part of photojournalism were able to survive only because some daredevil photographers venture further into combat zones than the more cumbersome TV crews. Reportage photography must therefore devote itself to other subjects or change its tendencies. This is already clearly evident in photographic competitions. Photographers are developing a more artistic approach or they describe their topics in a very subjective manner. This type of work is finding less and less of an adequate forum in magazines. Often the appropriate form of publication of large works is a book, which will then be reviewed again in magazines. But the style forms of reportage photography have also inspired other categories, for example fashion- and sports photography. In doing so, this type of photography restricts itself entirely to formal depictions. Naturally, the explanatory nature of classic reportage photographers, who for a time devoted their lives to showing certain events to the world, no longer plays any role."

A lot of current photo reportage is now done by amateurs, people who just happen to be at a scene and record it. The news outlets are becoming disseminators instead of news-gatherers.