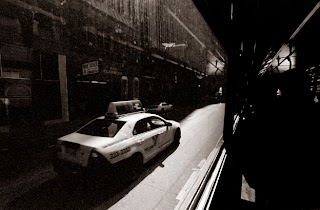 Back when I was shooting for stock and editorial content I was intent on being in absolute control of every frame I shot. Like many photographers in those days I insisted on using only the manual exposure settings on my Nikon F3. While the F3 is capable of stepless shutter speeds in its aperture priority automatic exposure mode, I was convinced I would get better exposures if I controlled all options for manual settings myself. I photographed that way for years and did quite well exposing slow transparency films.

It was some time after I stopped trying to make a living from photography that I ventured into that gray area of aperture priority exposure. Turning the shutter speed dial on my F3 to “A” I soon realized that the camera’s meter was going to give me virtually the same exposure reading regardless of which mode I had set. The Nikon F3 has an exceptionally good center weighted meter, it’s consistent and accurate. I had for years trusted it in manual mode so why not thrust it in the “A” mode? It wasn’t long before I was shooting the F3 exclusively in “A” mode.

Trusting aperture priority exposure gave me a certain freedom when shooting. I figured the camera was build to do this so why not let it do what it’s meant to.

Later technology created even more insecurities to be overcome. The introduction of “Program” exposure was just too much, no self-respecting photographer would give up that much control, both aperture and shutter speed selection. If you did use it and anyone else found out you would be mocked and ridiculed.

It’s different today. The new technology is indispensable. Digital cameras won’t function without advanced electronics, so today photographers rely on the micro chips even more. But when the FA and the F4 came out people just looked at that dial, saw “P” and said, “Don’t go there.” Well I have to admit I finally did it. 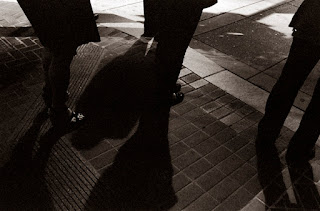 Earlier this year I was looking for a way to get a little more drama into my images and texture into my negatives. Film technology always advanced in the direction of finer grain and smoother tonal gradation. I shoot chromogenic black & white film so I don’t have to work with chemicals any more. (Labs don’t process B&W silver films worth a damn these days unless you want to pay extra charges.) So my negatives are virtually grainless and have an exceptional range of tonality as they are processed in C41 chemistry, which is very consistent. So I experimented.

I put a roll of Kodak BW400CN in my F4. I selected the center weighted meter function, set the exposure mode to “P”, attached a 28mm auto focus lens and hit the street. I was walking around with one of the most sophisticated point ‘n’ shoot film cameras ever conceived, and man was it fun. I certainly got more drama into my images, letting shadows just go while keeping the highlights under control, and I didn’t have to think about it. I could concentrate on composing for those shadows and I didn’t worry about what was moving in the frame. I had a blast and I liked the results. 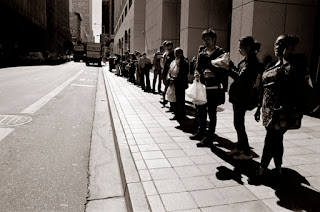 Going through this process reminded me of something a friend of mine once told me. He was a mechanic in the Air Force and worked on B-52s. He said when those planes came in they immediately drove big air bags under the wings to support them and the planes started leaking fluids and they had to work fast to get them in the air again, because they were built to fly, not sit on the ground.

The same can be said for auto exposure cameras: they were built to “fly” in all modes. They do work as advertised. “Program” exposure works, it can be trusted. It may not be right for every situation, but use it and you’ll probably get good results more often than not.

I was also hesitant at first in trusting the use of automation and rarely ventured into the "A" mode when I first got my Nikon F3. I guess at the time my Minolta meter provided so much more confidence than the built-in one on the F3 even though the Nikon turned out to be just as accurate. \

It wasn't until I started using the F4 that convinced me automation does work. With its ergonomic design and bright viewfinder it simply felt right to shoot on auto mode. Besides, my point-n-shoot Yashica T4 and Olympus Stylus consistently gave me accurate exposures so why should these SLRs be any less. "P" for professional . . . and I thought it stood for "Program":))